Facts and points of interest

Slowly but surely, the most basic need of a big part of the human race has changed:

No longer food, or machine production, but rather information and information selection. What next? We knew that a quantum leap had taken place even then – when reaching the set goals became hard; and that was indeed often the case after a new technology had begun to spread far and wide. And there often factored a resource bottleneck into the equation (prior to machine production there was a lack of workers). For this reason, resource bottlenecks often prove to be development stimulators.

Rapid development 1 – Generally the idea is predominanantly that the IT industry has developed unbelievably quickly – but it is not the same in all areas. Did you know that the majority of providers of virus scanners and spam blockers were developed within the space of a mere 10 or so years after this technology became available on the market?

And static passwords are still needed even today, what to do when users and providers make no reports on them even when they are more than 10,000 in number? (Regrettably, it seems to be the case that a burglar may up to something at the door of your castle at any time of day – all while being invisible to you and your neighbours).

Rapid development 2 – In reality technology is advancing very quickly; but the collective knowledge of the people often lies 10-20-years in the past – the business which offered Internet telephones 10 years ago, has already been bankrupt (again) for a long time – the principle has been gradually applying itself to international phone calls and among IT experts.

Rapid development 3 – Another example of the gradual adaptation of technological possibilities via collective knowledge, can be seen with a daughter firm of the former company Swissair: they sold tour packages over the Internet – 24/7 – with the option, that a user could ask an interactive question (today known as chat). the system knew, which specialists where logged on, what travel-knowledge they had and what language they spoke.
But the mentality of the users was not there yet – their business went bankrupt – because the users decided that they would be better off asking their two questions the next day: after 9 o’clock, over the phone.

Business unconsidered – Some things were developed once, from a textbook, only to never be discussed again, copied over and over again – after all, have you ever wondered exactly who would have an “Erase All Button” on a form? – it once was an example in a textbook.. ‘Knowledge’ vs. ‘Where to find knowledge’ – Development: 20 years ago my motto was: ‘know everything’. I’d heard all the recommendations, knew all the options, had access to all the programs. But it would eventually change to ‘find out everything’: today the challenge is one of finding out all the answers in the shortest possible time – a shift to meta levels. Naturally, having years of experience helps here – this is the way to understand an IT expert’s brain and its limits ever better.

Digital Immigrants – digital immigrants = the older generation, who became acquainted with IT only during the course of their life. how to recognize them:: They take one look at Google-Earth and say: it’s like an airplane.

Digital Natives = the younger generation, who came to the world of IT straight from birth.
Recognition signs: they fly for the first time and they say: this is like Google Earth.

Change in values – Development: our society is developing: our values are changing – from knowledge – to knowledge management.

Computers are intelligent – Computers are intelligent – a definition of intelligence, described by myself as one of the best in the business: intelligence does a selective process- similar stuff goes together.
If a Marsrover is looking for life, it is looking for structures – and it is there where the selecting will take place – essentially from the lowest of life forms. He who wants to be intelligent designates sub-categories. LARGE / small becomes LARGE / MIDdle / small. This is usually a common game between those who know best. And it is a automatic process in growth – be it personal or in a business. And it can be applied also the other way round: if it not happening, it means that growth is being impeded.

Microsoft – Microsoft often gets bashed, in some cases this might be right – specifically when political decisions are being taken, instead of logical ones, that would address users needs. Yet it is Microsoft, who made – life standards more easy for so many people – more than anyone else. Is anyone capable of remembering how it used to be? – a mouse driver for every application. A printer driver for every software. Standardized keyboard usage for every usage – it is but a huge merit for Microsoft. What IT teaches us 1 – The Asians say: Everything is connected with everything. I find this life wisdom has much to offer. Maybe, we are learning today what this really means, in practical terms?  Mobile phones increase reach ability immensely – just another term for being connected – we access data on servers, where they are, we have no idea anymore, but we are connected.

What IT teaches us 2 – In the current days, paradigms are dissolving, one by one. First off, there is the paradigm of knowledge being tied down to matter – facts used to be stated in books – the Gutenberg bible of 1452 weighed more than 10kg – while today this knowledge would fit on any memory stick a million times over. And the memory stick does not become heavier with more data on it. 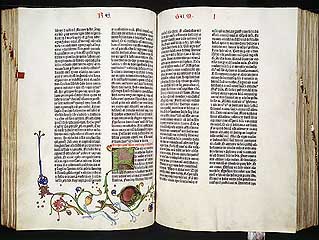 What IT teaches us 3 – In the current days, paradigms are dissolving, one by one. the paradigm of knowledge being tied down to a specific location – indeed, the Gutenberg bible was always in a designated position at the cloister library – and only a few monks were able to read it – while the knowledge of today is hardly tied down to a specific place any more – do you know from where the last hit of your google-query came from – maybe it was from a server in Arizona? Did it come from the cache of your Internet provider?

What IT teaches us 4– In the current days, paradigms are dissolving, one by one. Together with that of information being tied to a specific location, another one gets dissolved: you might not notice a robbery: when information is stolen – afterwards – it is still there (this is one of the biggest problems with industry espionage – nothing may be missing!).

What IT teaches us 5 – together with the paradigm , that information is being tied down to a specific location, there is also what might be labeled as the “multiplication factor” – knowledge can be duplicated within the shortest of time frames – and it becomes saved at many locations – once out of your hands – it becomes uncontrollable..